💥💥 Like if you want to see #GroundChuck get the W tonight! #MizunoFamily 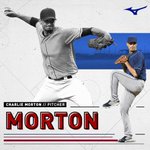 There is nothing quite like catching a baseball at a major league game! Fans that come to SunTrust Park to cheer on their favorite hometown team or the visiting rivals have the advantages.

Fan feedback from the first season in Suntrust Park lead to exciting upgrades to the 2018 MGX line-up:

The experience of watching a major league ball game is unlike anything else. Our number one goal of MGX is give baseball fans the best opportunity to catch a memory that will last a lifetime.

*To rent a glove, fans must be 18 years or older and have a valid credit card. Mizuno will place a $1 hold on a credit card to be dropped as soon as the glove is returned. If it is not returned within 48 hours, the credit card will be charged with the amount stated in the contract. Fans who decide to purchase gloves can enjoy a 10% off promotional code!